With Jeff Yoskowitz and Kathryn Gordon 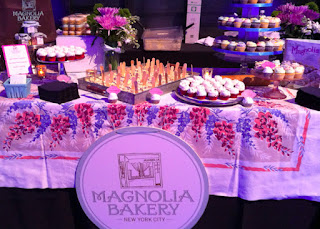 Kathryn:  Hi Vicki!  Can you tell us a bit about what Magnolia Bakery is up to, 17 years after it opened?

Vicki:  Originally there was just the (Greenwich) Village location (the Sex in the City one...).  Now we have 5 retail (brick and mortar) stores in Manhattan, one in Chicago and another in LA, and 4 franchised stores in the Middle East – with additional locations opening this year.

Jeff:  Vicki, we’re talking with you in the Magnolia Bakery centralized NY production kitchen for online orders and product development.  You seem to be preparing a lot more than cupcakes in this location.  Can you tell us about the product line?

Vicki:  It has evolved over the years.  Originally there were layer cakes, but cupcakes became popular, and essentially Magnolia was the first cupcake store – and cupcakes still account for 53% of sales.  Now we offer wholesale, and more large cakes, cheesecakes, bar cookies, cookies and seasonal large and baby pies.  We have been doing dessert tables for weddings and parties.  Still, vanilla-vanilla and vanilla-chocolate cupcakes are the best sellers.

Kathryn:  How would you describe the product line?

Vicki:  Everything is homey-style and freshly produced.  Our motto is American affordable luxury.  Everything is appealing but simple – like "made by mom."

Looks sell first!  So I work on product development – but one of the fun parts of my job is to develop seasonal décor for our cupcake specials.

Jeff:  You started working for Magnolia about half a year ago.  What’s the rest of your job scope?

Vicki:  Magnolia Bakery evolved from one simple store, and was sold in 2006 to an ownership group who has been rapidly expanding its locations.  What worked in one location (measurement in volume) does not work for franchises and additional corporate owned stores.  I have now converted all the cupcake recipes to measurement by weight, and standardized the yield (60 cupcakes per batch).  The equipment in each location is still small, and not geared for production.  Busy locations like Rockefeller Center work continuously baking fresh batches – no location has large industrial size equipment.  I am now working on converting all the cupcake icings.  Everything takes time, to make changes and implement controls.

Kathryn:  And you said that one of those locations actually had converted your recipes (by grams) back to volume measurements, when you visited it…

Vicki:  Unfortunately, yes!  One issue has been that there has been a very decentralized structure in each store – no hierarchy.  That means no central person to talk to, for me, when I have to make changes in the procedures or formulas.  I am working now to have a head baker assigned to each bakery.

Jeff:  What other issues have you encountered, as the original formulas have been replicated in each new location?

Vicki:  It’s interesting, I visited Chicago because they were having issues with a cupcake.  I learned by going to Target and buying Arm & Hammer baking soda (which is available nationally) that the commercial baking soda in Chicago was different, and that was causing them issues with the recipe.

Kathryn:  I’d always heard that chemical leaveners around the world were regional!  Very interesting proof of that theory. 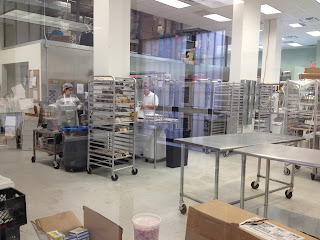 Vicki: Also, now that we have (franchise) locations in the Middle East – we cannot use traditional vanilla extract because it is alcohol based.  So we have reformulated the recipes.  Actually, all of the baking ingredients for those locations have to be shipped from NY, because the ingredients there are just different, or just not available (like in Dubai).

Kathryn:  You have an enormous number of Styrofoam shipping components here.

Vicki:  Everything that has to be shipped is test shipped.  We send shipments to family and friends to ensure it all arrives with the quality intact.  Everything is insulated in double boxes.  In fact, we’ve determined that for cupcakes to be shipped – they have to be frozen over a 3 day period to be solid enough and ship intact.  Temperature alone isn’t enough. 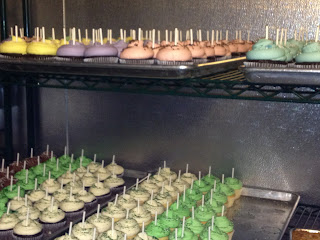 Jeff:  What’s your next project here at Magnolia Bakery?

Vicki:  I am continuing to work on having a head baker in each store because I need someone who I can contact with a clear line of communication, and who understands new standards when we introduce them, and who will be responsible for training all their staff to produce new and existing products consistently.  We have a great staff training program – but consistency is key as we get ready to open additional national locations. 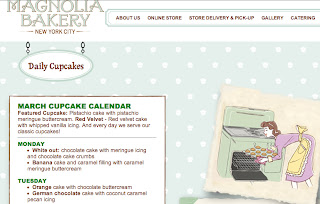 Posted by The Bakers at FoodStartUpHelp.com at Monday, May 27, 2013 No comments: